Due diligence towards Due Diligence

Despite Brexit, the EU remains the UK’s largest single export market. In 2020, the EU took in 42% of UK exports by value. Roughly a third of UK exports are finished goods and services but the bulk is made up of inputs into the supply chains of other EU-based businesses.  Companies selling finished goods and services are likely to be acutely aware of the need for compliance with EU norms so as to be able to sell on European markets. However, some of those supplying inputs may be less familiar with new EU legislative proposals. This will be particularly true of those indirectly linked to EU supply chains only by virtue of selling to other British firms that have a contractual relationship with an EU-based company.

A new draft European law, the Corporate Due Diligence Directive, has just been issued by the European Commission. It will have an impact on all companies that either trade directly or indirectly with the EU. Ostensibly, it applies to all companies over a certain size and trading in the EU, regardless of whether they are based in the EU or not. However, the requirements of the law will have a cascading effect across supply chains that will sweep up indirect sellers too. 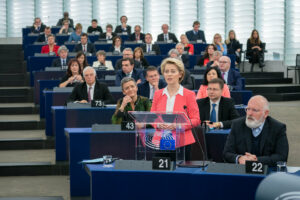 As drafted by the Commission, this new law requires large companies to put in place measures to ensure that they and companies in their supply chain have a plan for achieving net zero and for avoiding any human rights abuses. They are required to identify and mitigate any adverse impacts. If they fail to do so, directors will be in breach of their duties under company law, the company can be sanctioned by new authorities which will be set up to police the regime, and, the company can be sued by individuals or communities which suffer the adverse impact. Risk of the latter will likely incentivise large companies to reduce their litigation risk by requiring contractors in their supply chain to conduct compliance audits and to take on the liability for any breaches, who will in turn require the same from their suppliers.

The European Commission is currently arguing that the turnover and employment thresholds mean that only 13,000 EU companies and 4,000 third country enterprises would be caught directly by the Directive. However, this framing is misleading because of the likely cascading effect via commercial contracts. Most small and medium enterprises are part of larger business’s supply chains. A recent survey by the Department for Business in the UK found that 77% of Small and Medium Enterprises in the UK self-identified as being part of supply chains. The number engaged directly and indirectly in trade with European supply chains will be lower but still substantial, perhaps around 20% of UK SMEs.

This new law is highly controversial. The European Parliament wants to make it even tougher, possibly by including criminal liability for directors. Conversely, European business groups want to reduce its red tape effects. Some Member States are also concerned at the burden it will impose on European SMEs. Debate will be extensive within the EU institutions and the Directive will likely take at least two years to pass through the institutions before being adopted. Implementation will take at least an additional two years.

What about the UK?

Once passed, the law is likely to be an influential example for other economies. The UK already has a not dissimilar law in place for large UK pension schemes. It is not inconceivable that it would ultimately bring corporates from other sectors under a similar regime.

Historically, the UK government would have been a major participant in the debate. However, UK companies are on their own now. They will have to find alternative vehicles for getting their views across to the EU institutions.

Whitehouse Communications is keeping a close eye on this major development.

The Impact of The EU Farm To Fork Strategy