Rishi Sunak is more popular with tory MPs than with the party’s grassroots, and the risk is the MPs get a Leader they didn’t want. Could chaos ensue?

Chris Whitehouse, Chair of Whitehouse Communications, and a prominent political consultant and public affairs lobbyist, sounds a warning that the Conservative Party could be heading for disaster.

The wind is in Rishi Sunak’s sails as we head into the weekend after two rounds of voting in the Conservative Leadership election. He has bagged 101 votes from tory MPs already, and hopes to pick up more next week as other candidates are eliminated.

Penny Mordaunt has a creditable 83 and Liz Truss is holding strong in third place with 64.

So the final run-off seems likely to be between Sunak and one of either Truss or Mordaunt as the two candidates to be put before the wider Conservative Party membership, currently at over 160,000 members. Alarm bells should be ringing in Westminster offices, and loudly. 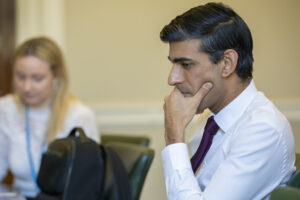 What if Rishi Sunak secures the backing of a substantial majority of MPs, but the grassroots members, with whom he is no longer so popular, back the other candidate and so foist upon the Parliamentary party a candidate whom they didn’t really want? The last time that happened, when Iain Duncan Smith was voted leader, it didn’t go well at all.

To be fair, Duncan Smith was in Opposition and so didn’t have the power of patronage to buy loyalty, but the distrust and division within the party could still be destabilising for whoever ends up as Leader. Cue chaos? If not a poisoned chalice, then one potentially with a bitter after-taste.

More on the Conservatives can be found here.

The party is over for Boris Johnson as he resigns