Euro Channel: German elections – a historical landslide or “much ado about nothing”?

On 26th September, 45 million Germans went to the ballots to elect a new government. It is no surprise that a political change in the country that is “doomed to lead Europe”, as the Economist once put it, has caused leaders in Brussels, London, and across the globe, to take notice.

The departure of chancellor Angela Merkel – and with her, a sentiment of stability and consistency –surely caused unrest in Brussels and London. But it is not just the end of Merkel’s reign that leaves leaders worried. Political decisions taken in Germany often mirror the wider political sentiment in Europe, and so the eclipse of the conservative Christian Democrats (CDU) may foreshadow an urge for political modernisation and renewal in the EU and UK.

But back home Germans also find themselves at a political crossroads, with both a “continuity” coalition spearheaded by Merkel’s party, the CDU and a “renewal” coalition led by the centre-left social democrats (SPD) possible. While the final governmental composition is currently being negotiated in coalition discussions, the only guarantee is that any new government will be supported by the junior parties Liberal Free Democrats (FDP) and the Greens, whose support is needed to reach the number of seats necessary to form a government.

With the political direction of Europe’s most influential Member State uncertain, one might wonder what impact the election outcome will have on relationships between Germany, the EU and the UK. With Merkel gone, will relationships have to be redrawn from scratch, or is it “much ado about nothing”?

An election of the extremes?

The election evening of Sunday 26th September might go down in history as an evening of the extremes. What had been dreaded by the CDU – and hoped for by the opposition – in the weeks leading up to Election Day turned into bitter reality when the exit polls were released shortly after 6 pm: voters punished the CDU with a historically low election result of 24%. Even worse for the CDU was that Merkel’s own constituency was won by the rival SPD candidate. Once seen as a Volkspartei (“People’s Party”) with around 45% of votes in general elections, the CDU’s eternal “mandate to govern” had started to falter, reflecting the sentiment among many German voters that a policy of continuity is not enough to tackle society’s current challenges, especially regarding the climate crisis.

At the other end of the spectrum, the German Greens – which put forward 40-year-old Annalena Baerbock as the youngest candidate for the chancellor in history – celebrated a record-high result with nearly 15% of votes. Although “celebration” is perhaps not exactly the right expression here, as surveys had projected the environmental party to win the hearts of around 20% of the electorate.

Election night also witnessed an “extreme recovery” for the SPD. Long presumed politically dead, the party secured the largest share of votes with 25,7%, possibly catapulting Olaf Scholz into the chancellery.

What does this mean for the new government? Politically fragmented as never before, Germany is heading towards its first-ever three-party coalition. And when looking at the possible options, another extreme emerges: with the German social-democrats (SPD), the Greens (Die Gruenen) and the liberal Free Democrats (FDP) strong enough to form a “traffic light” government, the CDU may, for the first time since 1980, not even be in power. The other alternative, another Grand Coalition, is no longer a viable option, with currently only 21% of Germans supporting another coalition between SPD and CDU. A “Jamaica coalition” of CDU, Greens and FDP is the least favoured option, with only 19% of voters in favour.

Despite these extremes, it is striking that the parties at the edges of the political spectrum have actually lost their footing in the Bundestag. Indeed, both the far-right and far-left parties have suffered electoral defeats – much to the benefit of the parties in the political (and democratic) centre. 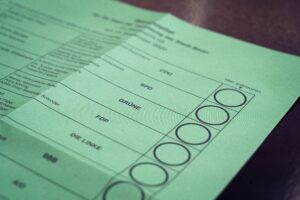 While German voters were holding their breaths on the eve of the election, a few hundred kilometres South-West of Berlin, politicians in Brussels’ were mourning the inevitable departure of Angela Merkel. Throughout her 16 years in office, Merkel has somewhat become the stabilising force of the European Union, tirelessly manoeuvring the bloc through the financial, refugee and COVID-19 crises.

However, Brussels is not only concerned about who will follow in Merkel’s steps but also how long the process of finding her successor – and a new German government – will take. With many flagship initiatives currently being negotiated at the EU level, there is a concern that Germany, preoccupied with domestic affairs, may be unable to speak with one voice in strategic discussions on issues such as the new Fit for 55 climate package, which may paralyse negotiations in the Council.

Looking ahead, if the ongoing coalition negotiations provide the centre-left candidate Scholz with the mandate to form a new government, Germany will join Denmark, Sweden, Finland, Spain and Portugal in the club of centre-left governments. While such a political shift will not have a direct impact on the power balance in the European Parliament – in which the conservatives will remain dominant at least until the next European Parliament elections in 2024 – what may be possible is that dynamics will change in the Council, where national Ministers negotiate and adopt EU laws and also set the EU’s foreign policy direction

As such, a change in the political direction of Europe’s most influential Member State may leave some other EU Member States worried. For instance, an Economic and Financial Affairs Council dominated by a German Finance Minister of the liberal Free Democrats, which stand for stricter austerity policies at the EU level, might not be welcomed by some Southern Member States. In contrast, selected Eastern Member States may have a hard time in the Environment Council, where a German Environmental Minister of the Greens might push for a quicker coal exit and an overall more ambitious climate agenda.

During the Merkel area, the Franco-German axis has often set the direction of European politics. With Merkel retired and the French Presidency of the Council around the corner, Macron will be busy finding a new reliable partner in Europe that will help push the French agenda. However, despite the end of “Merkcon”, the pro-European Scholz, who as a former Finance Minister already established a good working relationship with his French counterpart Bruno LeMaire, will likely be well-received in the Élysée.

Shifting the focus to the other side of the Channel, Brexit and Britain did not, and will not, play a role in political campaigns and coalition negotiations. With all candidates being fierce pro-Europeans who share the belief that Brexit was a mistake, it has been the unspoken consensus among the leading German parties to side-line the topic of Anglo-German relationships in the run-up of the elections.

While Britain is no (political) priority for Berlin, from an economic perspective a shift from a conservative, CDU-led government to one with a centre-left outlook may mean that London will have to re-win Berlin’s attention. Indeed, while Merkel has made efforts to uphold an economic partnership between Germany and the UK, as shown by her support for a new “friendship treaty or cooperation agreement” that she expressed during her farewell visit to Downing Street in July, (economic) dialogue with the SPD has so far been absent. With SPD candidate Scholz now en route to form a new government, London will have to convince Berlin of its importance as an economic partner if it wishes to benefit from the German economic “powerhouse”.

For the first time in 70 years, Britain is on course to lose its status as one of Germany’s top ten trading partners, with exports of British food and drink to Germany having declined by 49.4 per cent in the first half of 2021 due to post-Brexit trade barriers. On top of the grim economic outlook, Scholz is known to defend a hard foreign policy line when it comes to the UK’s decision to withdraw from the EU, having recently clarified that “we have worked very hard to convince the British not to leave the European Union. Now that they decided differently, they will have to manage the problems coming from that”.

Much ado about nothing?

Although a new German chancellor will inevitably bring about a change in scenery after the 16 years of Merkel’s reign, the EU and UK will not necessarily have to start from scratch to build their relations with Berlin. In Brussels, the direct impact will be limited to the Council, while in London, any change will mainly focus on economic relations.

What is more, Germany’s institutional and party-political setup will prevent extreme political shifts. Germany’s majority voting system and diverse party landscape mean that parties must cooperate to form a government, and so coalitions are usually characterised by moderation and compromise, limiting the risk of extreme political and policy decisions. Secondly, while the election results indicate an appetite for modernisation among German voters, a left-wing coalition between The Left, the Greens and the SPD failed to win a majority, further preventing a “landslide to the left”. And lastly, the German SPD is itself by no means a hard-line or extreme left-wing party, with their positions having been softened by eight years of Grand Coalition with the CDU.

In Berlin, the next few weeks will witness rounds of intense negotiations between Greens, FDP, SPD and CDU. With the SPD having accepted the FDP and Green’s invitation to start coalition negotiations this week, the signs currently point towards a “traffic light coalition” with the CDU in opposition. However, nothing is decided as of yet, and so for the time being, the outgoing CDU-led government will continue to oversee ongoing affairs – possibly for the last time in the next five years. Meanwhile, in the EU’s capitals, the election results may be seen as a forecast for forthcoming elections, giving a hint on what can be expected in France in 2022 and at the EU level in 2024. And Merkel? She will enjoy her well-deserved retirement

Photo by Mika Baumeister on Unsplash