When cheers rang out below the Eiffel Tower where supporters of French president Emmanuel Macron gathered to support their candidate’s election victory, sighs of relief were heard at the Berlaymont building in Brussels where EU policymakers feared the election of a far right Eurosceptic. Is Macron’s election victory a sign of waning populism across Europe or merely a result of French voters’ distaste for a far right Marine Le Pen presidency?

The incumbent president’s victory over his omnipresent far right rival Marine Le Pen represented a brief respite for a European Union beleaguered by more than a decade of challenges from populist politicians in national capitals promoting an “us versus them” narrative while pointing to Brussels as the ultimate source of problems faced by citizens. As a self-styled European and anti-populist, Macron has succeeded in painting a positive image of France’s role within the EU, suggesting that there was no other alternative for voters except for the nationalist pessimism expressed by Le Pen. Indeed, during his campaign, Macron himself framed the election as a symbolic referendum on Europe. 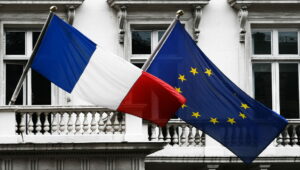 An optimistic sense that the so-called populist wave – which has at times threatened to submerge the EU – is now in retreat has been bolstered by parliamentary elections in Slovenia where incumbent prime minister Janez Janša’s governing party was defeated by the newly-formed liberal Freedom Movement party led by Robert Golob.

Janša has long been considered one of Europe’s “black sheep” leaders who has been linked to Hungary’s authoritarian prime minister Viktor Orban and has styled himself in the political image of Donald Trump. He has on several occasions found himself at loggerheads with his fellow EU leaders, including by refusing to accept Joe Biden’s victory in the 2020 US presidential election. In contrast, opposition candidate Golob expressed his desire during the election campaign to rebuild Slovenia’s tarnished reputation within the EU.

A glimmer of hope?

These election results in France and Slovenia provide a much-needed boost for politicians based in both Brussels and EU national capitals who have been wearied by years of the prospect of populist politicians bringing chaos to European politics. Yet is it too soon to say that Europe’s populist wave is in retreat?

Symbolically for Europe’s establishment figures, Macron has become the first French president to be re-elected since Jacques Chirac in 2002. His relatively large margin of victory over Le Pen confounded polling data which had recently suggested that she was closing in on the incumbent centrist president. In Slovenia, populist leader Janez Janša’s crushing electoral defeat to liberal challengers has also raised hopes that the country’s slide toward a more authoritarian political model can be reversed in the coming years.

However, digging behind these electoral results reveals a more concerning story for the future of European politics. Macron’s victory margin over Le Pen nearly halved in comparison to the 2017 presidential election and is incomparable to the political annihilation suffered by former far right leader Jean-Marie Le Pen twenty years ago. To beat his rival, Macron relied on supporters of far left candidate Jean-Luc Mélenchon who turned out to vote against Le Pen; however only 8% of these left wing voters did so because they believed Macron to be a good candidate. There are serious questions as to the long-term health of a democracy in which its leaders are unenthusiastically elected as the “least worst option”.

Indeed, political winds change quickly and blow strongly. Europe’s governments are faced with significant economic challenges resulting from both the continent’s emergence from the COVID-19 pandemic and from Russia’s invasion of Ukraine. Across the EU, inflation is currently running at 7.5%, although these levels are even higher in certain Member States such as Estonia, Lithuania, and the Netherlands.

With inflation primarily driven by soaring energy prices and with the World Bank expecting food prices to rise significantly this year, it will likely be the poorest in society which will be most impacted by these economic pressures. To some extent, consumers are currently shielded from the most acute impacts of rising prices due to national government policies – such as price caps and tax reductions – aimed at lowering the cost of commodities, but this protection cannot last indefinitely.

A new wave on the horizon

When economic pressures begin to impact citizens across Europe more significantly, we are likely to see incumbent governments struggle to enact further effective policy responses and therefore struggle at the ballot box. In contrast, populist politicians of all varieties will point to seemingly simple solutions to solve the inflationary cost of living crisis, whether it be right wing populists criticising immigration or left wing politicians attacking economic elites.

With voters searching for answers to their economic problems, these simple solutions provided by Europe’s populists may prove too attractive to resist. For the UK government – still grappling with its implementation of the Northern Ireland Protocol and other post-Brexit border checks – a fresh populist wave across Europe would prove a challenging negotiating partner but may also present some cracks in the EU’s political unity.