A hard week for women

This week has been hard for women.

On Monday, many of us marked International Women’s Day by celebrating the women who inspire us. We reflected on our successes, applauded our progress and toasted to our futures.

It’s now Thursday and we couldn’t be further from this sentiment.

The disappearance and alleged murder of Sarah Everard has confirmed to many of us the dangers we spend a lot of our lives fearing – and in many respects, anticipating.

Women across the UK – and those of us living in South London in particular – feel scared. Whether we feel grateful or guilty knowing that the target wasn’t us, many of us feel as though it could have been.

Innumerable women have documented their experiences online of the threats to their safety they face on a day-to-day basis. Many accounts detail a worrying prevalence of police inaction and indifference.

Others have spotlighted previous cases to demonstrate how many times the justice system, designed to protect us, has failed. The hard truth is that police violence against women, particularly Black women, is endemic in the UK.

Data gathered last year by the Centre for Women’s Justice revealed 666 reports of domestic abuse related incidents and offences perpetrated by the police, over a three year period, in 30 of the 43 police forces in England and Wales.

Let us not forget that it was also only last year when Metropolitan police officers took pictures of themselves next to the bodies of two murdered Black women and shared them via the WhatsApp messaging app.

These lamentable incidents form only a small part of the reality of living in the UK as a woman. They expose how far we still have to go for women to feel safe in a society that many of us feel has not been constructed by or for us.

The Prime Minister’s forthcoming Violence Against Women and Girls Strategy has the potential to deliver meaningful change – but this does not mean change is inevitable.

It must be the first in a comprehensive series of efforts that reverse the all too familiar narrative that puts the onus of responsibility on women to stay safe, rather than on perpetrators of violence to take accountability for their actions.

Central to this must be a far-reaching strategy to target rampant misogyny and victim-blaming. It must ambitiously address all forms of male-to-female microaggressions, harassment and violence that reinforce these attitudes: everything from cat-calling, to groping, to stalking, to assault, to rape.

The government must also support, engage with and learn from existing groups campaigning to end violence against women, such as Our Streets Now, an organisation that is calling for public sexual harassment to be made a criminal offense in the UK.

This week has been hard for women.

Many of us have witnessed the torrent of abuse and unfathomed mistrust directed towards Meghan Markle after she shared her struggles with her mental health, including suicidal ideation while pregnant, during her time as a working royal.

Women are being forced to contend with the painfully familiar societal tradition of dismissing women’s physical and psychological pain as “hysterical”, “imagined” or a “diatribe of bilge.”

The UK has been too quick to forget how similar incessant media bullying and harassment led to the tragic death of Caroline Flack in February last year.

We are aggressively assured that this isn’t sexism – it’s free speech.

These attitudes are emblematic of a wider issue: that women are less likely to have their illnesses, particularly mental illnesses, taken seriously.

The government’s forthcoming Women’s Health Strategy must not fall prey to political tokenism, but instead make significant strides to improving the perception of women’s healthcare needs. This should start with research and representation.

We are nearing the end of the week, with many of us feeling exhausted.

The government must now make sure that women’s voices are heard. We cannot afford for it not to. 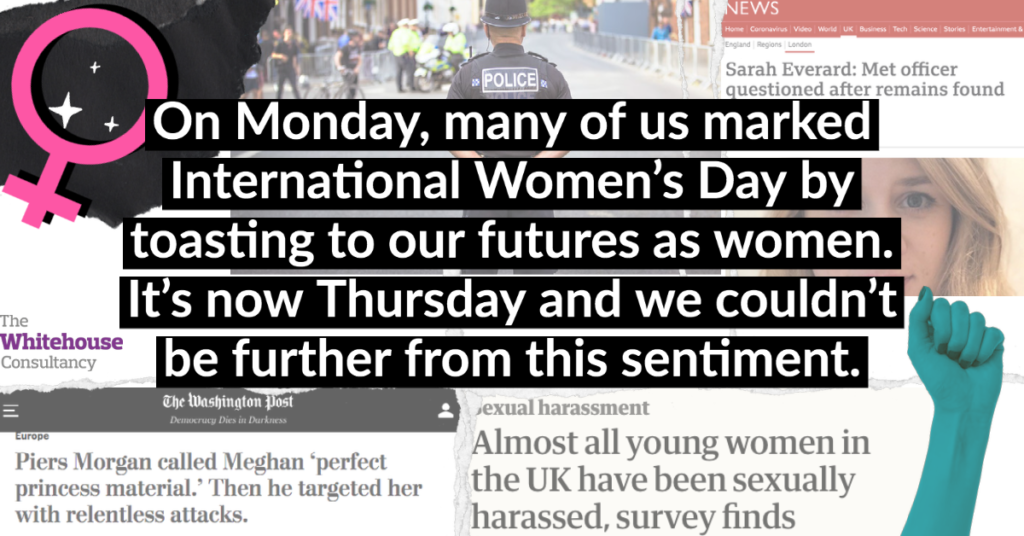 Political Consultancy
The Whitehouse team are expert political consultants providing public relations and public affairs advice and political analysis to a wide range of clients, not only in the United Kingdom, but also across the Member States of the European Union and beyond. We work in a number of sectors including human rights and equalities. For more information, please contact our Chair, Chris Whitehouse, at chris.whitehouse@whitehousecomms.com.

Read more in our series for International Women’s Day here.